I absolutely love the Kallarp two tone kitchen which we’ve fitted in our eighth renovation project.  I’ll go so far as to say it the best room we’ve finished on the Metcalfe Makeovers journey to date.

Inspiration For Our Two Tone Kitchen

The inspiration for our blue and turquoise two tone kitchen came from this image that I found on Pinterest.  I’ve seen it quite a lot over the years and I really like it.  I already knew that Ikea did a range of kitchen units which had green and blue option, and what with the blue theme which seemed to be running through this renovation, it was the perfect choice of kitchen. 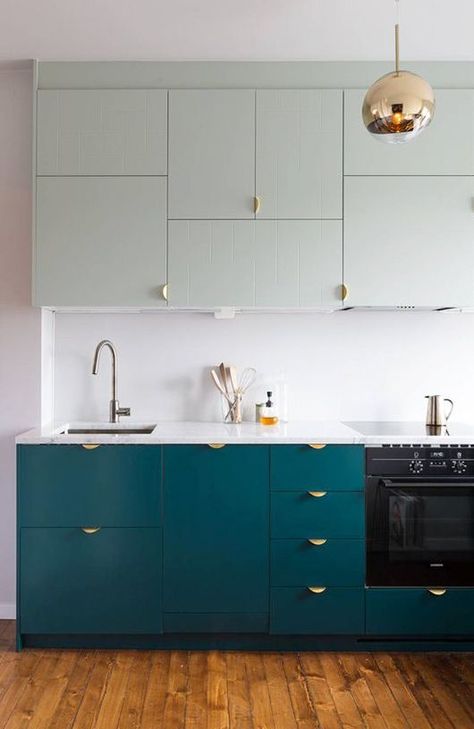 When we bought the house, the kitchen, like the rest of the rooms was in a bit of a state.  The roof falling down was one of the reasons we couldn’t initially get a  mortgage on the property.  The pure filth in the kitchen and beyond was another.  It was massively dated and not a square inch was salvageable (especially not the horrid brown sink!)

As is usual with our renovation projects, we set about clearing the house as soon as we picked up the keys.  Within 24 hours of picking up the keys, the kitchen was long gone, giving us a chance to really make a big change to the property.

So that we could make the most use of the space and to be able to fit a perfect kitchen, we soon realised needed to make it a bit bigger.  There wasn’t much room to play with, but we were able to move the stud wall back 10cm.  Just 10cm made a huge difference.  It enabled us to have a kitchen large enough to install two corner cupboards and the oven unit against the back wall.

All new plumbing and electrics were installed and hidden within the new stud wall frame, and a false ceiling covered the lintel which was previously hidden in an arch/  It made the kitchen and dining room appear as one.

To finish the room preparation, our loyal plasterer ‘Kev Trev’ came and skimmed all the walls.  It gave us a good base to start working from.

After installing the carcasses for the wall units, we set about laying the flooring, which covered the entire ground floor.  We opted for a distressed white and grey flooring from B&Q, which was similar to the style we fitted in Thorold Road (our 2nd home renovation).  Sadly on this purchase the  quality was not apparent in the laminate, with many of the boards being damaged and unusable.  It has made us reconsider using B&Q flooring in another renovation, although it does look nice when fitted, and gave us the ‘look’ we were after.

With the floor laid and all carcasses fitted,

After fitting the kitchen it was time to decide on tiles.  Or more so, it was time to persuade Darren on what would be the perfect tile.  I had already fallen in love with the Fusion range of tiles which B&Q sell, and had originally wanted them in the bathroom, but they were well above budget.  Still, I knew they would look great in the kitchen, so I fluttered my eyelashes enough times, and finally Darren agreed.

I know he hates to admit it, but these pretty tiles made our kitchen!  They were totally worth going over budget for, and I would definitely use them again one day.

Our Kallarp two tone  kitchen has turned out better than I had hoped.  It’s both functional and funky which is what I think a space should be.  Although its a tiny area, its works really well.   What do you think of it?  Let me know below.

If you want to replicate this beautiful kitchen, I’ve listed the sources of the products we bought below.

Hi, we're Victoria & Darren Metcalfe, home renovation addicts who are currently transforming our dream home in an 18th century manor in Hampshire, UK and renovating our 100 year old Spanish Town house on the the Costa Blanca